Facts About Windows Configuration And Monitoring

In this article, I want to talk about some of the Windows configuration and tools that you need to be aware of. Follow me as we are going to look at that in this article.

Sometimes, it is necessary to run or install software that requires the privileges of the Administrator. To accomplish this, there are two different ways to install it.

Right-click the command in the Windows File Explorer and choose Run as Administrator from the Context Menu. 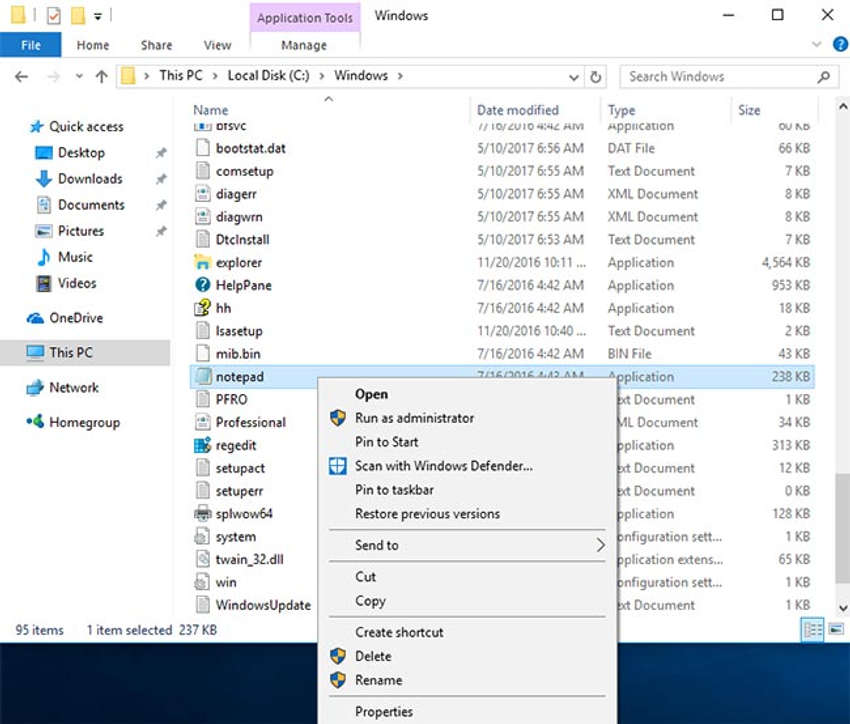 When you start a new computer for the first time, or you install Windows, you will be prompted to create a user account. This is known as a local user. This account will contain all of your customization settings, access permissions, file locations, and many other user-specific data. There are also two other accounts that are present, the guest, and the administrator. Both of these accounts are disabled by default.

The Guests account should not be enabled. The guest account does not have a password associated with it because it is created when a computer is going to be used by many different people who do not have accounts on the computer. Each time the guest account logs on, a default environment is provided to them with limited privileges.

To make administration of users easier, Windows uses groups. A group will have a name and a specific set of permissions associated with it. When a user is placed into a group, the permissions of that group are given to that user. A user can be placed into multiple groups to be provided with many different permissions. When the permissions overlap, certain permissions, like “explicitly deny” will override the permission provided by a different group. There are many different user groups built into Windows that are used for specific tasks. For example, the Performance Log Users group allows members to schedule logging of performance counters and collect logs either locally or remotely. Local users and groups are managed with the lusrmgr.msc control panel applet, as shown in the figure. 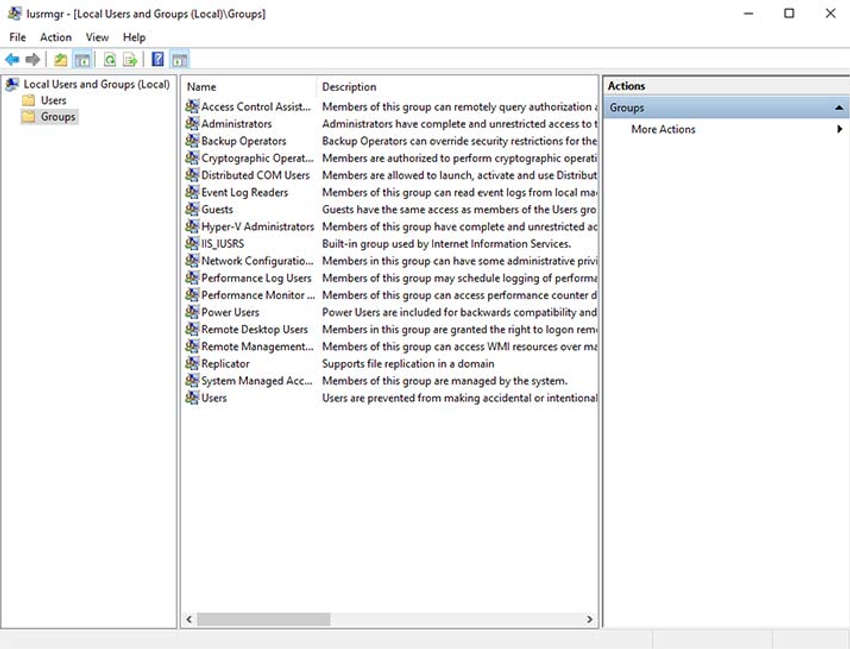 In addition to groups, Windows can also use domains to set permissions. A domain is a type of network service where all of the users, groups, computers, peripherals, and security settings are stored on and controlled by a database. This database is stored on special computers or groups of computers called domain controllers (DCs). Each user and computer on the domain must authenticate against the DC to logon and access network resources. The security settings for each user and each computer are set by the DC for each session. Any setting supplied by the DC defaults to the local computer or user account setting.

The Windows command line interface (CLI) can be used to run programs, navigate the file system, and manage files and folders. In addition, files called batch files can be created to execute multiple commands in succession, much like a basic script.

To open the Windows CLI, search for cmd.exe and click the program. Remember that right-clicking the program provides the option to Run as administrator, giving much more power to the commands that will be used.

The prompt displays the current location within the file system. These are a few things to remember when using the CLI:

Even though the CLI has many commands and features, it cannot work together with the core of Windows or the GUI. Another environment, called the Windows PowerShell, can be used to create scripts to automate tasks that the regular CLI is unable to create. PowerShell also provides a CLI for initiating commands. PowerShell is an integrated program within Windows and can be opened by searching for “powershell” and clicking the program. Like the CLI, PowerShell can also be run with administrative privileges.

These are the types of commands that PowerShell can execute:

To see more information about Windows PowerShell and get started using it, type help in PowerShell, as shown in the command output.

There are four levels of help in Windows PowerShell:

Windows Management Instrumentation (WMI) is used to manage remote computers. It can retrieve information about computer components, hardware and software statistics, and monitor the health of remote computers. To open the WMI control from the Control Panel, double-click Administrative Tools > Computer Management to open the Computer Management window, expand the Services and Applications tree and right-click the WMI Control icon > Properties.

The WMI Control Properties window is shown in the figure.

These are the four tabs in the WMI Control Properties window:

Some attacks today use WMI to connect to remote systems, modify the registry, and run commands. WMI helps them to avoid detection because it is common traffic, most often trusted by the network security devices and the remote WMI commands do not usually leave evidence on the remote host. Because of this, WMI access should be strictly limited.

There are two very important and useful tools to help an administrator to understand the many different applications, services, and processes that are running on a Windows computer. These tools also provide insight into the performance of the computer, such as CPU, memory, and network usage. These tools are especially useful when investigating a problem where malware is suspected. When a component is not performing the way that it should be, these tools can be used to determine what the problem might be.

The Task Manager, which is shown in the figure, provides a lot of information about the software that is running and the general performance of the computer. 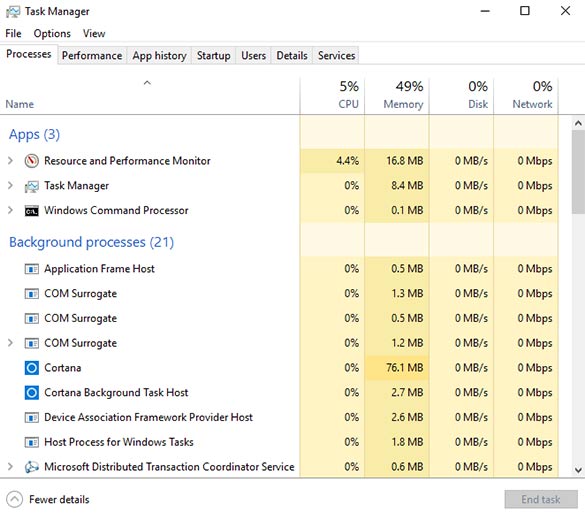 The table describes the seven tabs in the Task Manager.

When more detailed information about resource usage is needed, you can use the Resource Monitor, as shown in the figure. 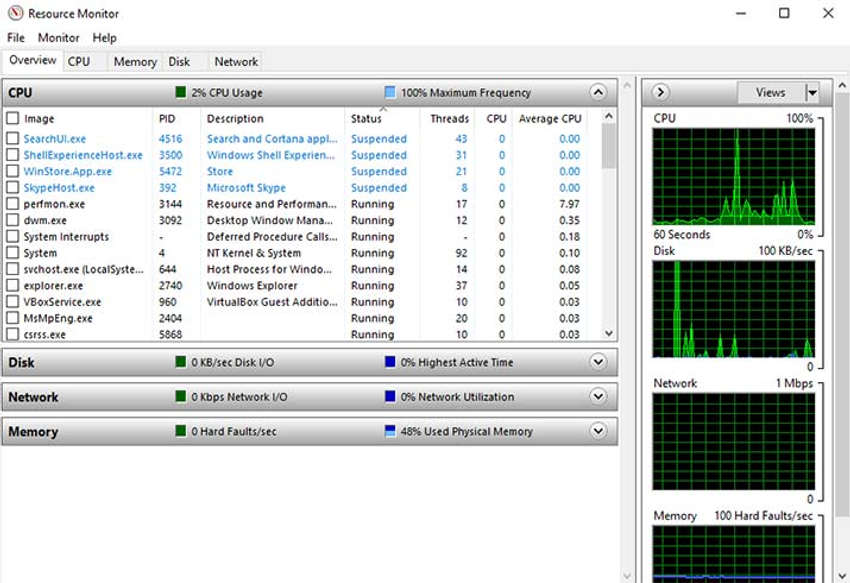 When searching for the reason a computer may be acting erratically, the Resource Monitor can help to find the source of the problem.

The table describes the five tabs of the Resource Monitor.

One of the most important features of any operating system is the ability for the computer to connect to a network. Without this feature, there is no access to network resources or the internet. To configure Windows networking properties and test networking settings, the Network and Sharing Center is used. The easiest way to run this tool is to search for it and click it. Use the Network and Sharing Center to verify or create network connections, configure network sharing, and change network adapter settings. 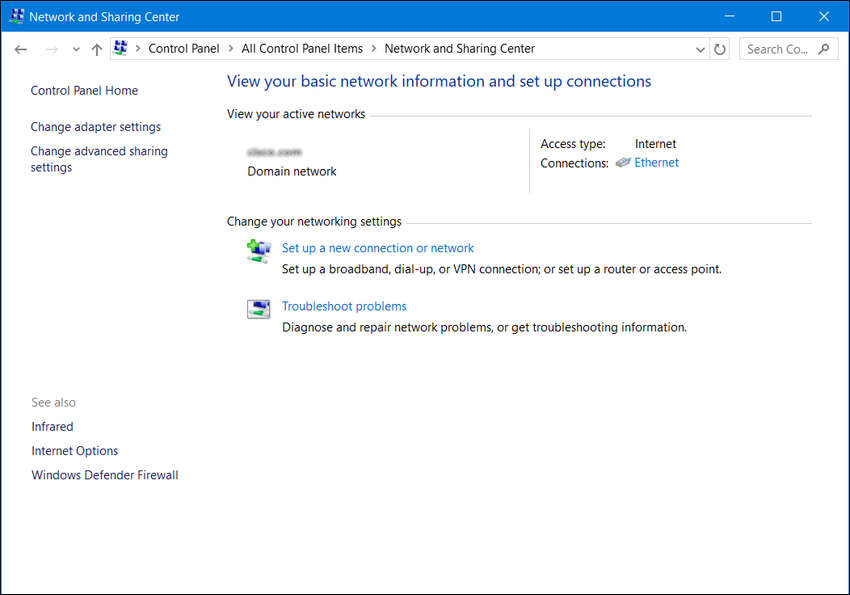 The initial view shows an overview of the active network. This view shows whether there is internet access and if the network is private, public, or guest. The type of network, either wired or wireless, is also shown. From this window, you can see the HomeGroup the computer belongs to, or create one if it is not already part of a HomeGroup. This tool can also be used to change adapter settings, change advance sharing settings, set up a new connection, or troubleshoot problems. Note that HomeGroup was removed from Windows 10 in version 1803.

To configure a network adapter, choose Change adapter settings in the Networking and Sharing Center to show all of the network connections that are available. Select the adapter that you want to configure. In this case, we change an Ethernet adapter to acquire its IPv4 address automatically from the network.

Right-click the adapter you wish to configure and choose Properties, as shown in the figure. 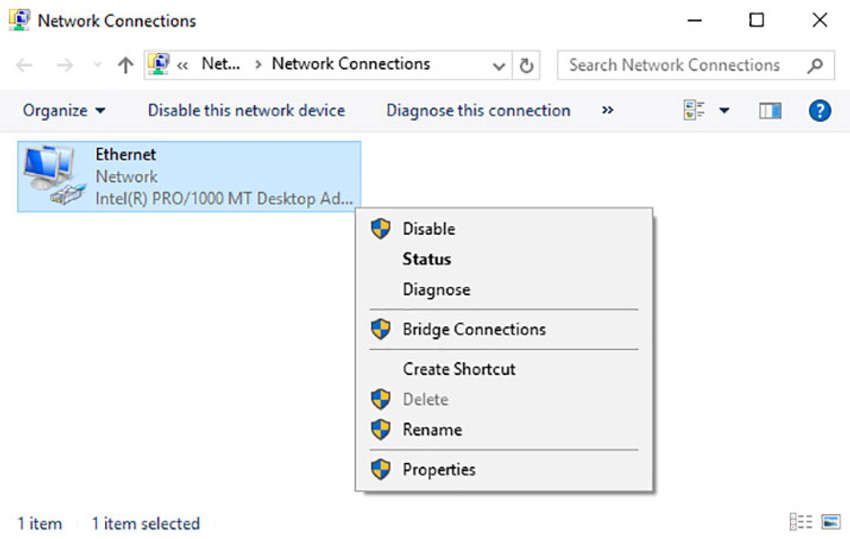 Domain Name System (DNS) should also be tested because it is essential to finding the address of hosts by translating it from a name, such as a URL. Use the nslookup command to test DNS. Type nslookup cisco.com at the command prompt to find the address of the Cisco webserver. When the address is returned, you know that DNS is functioning correctly. You can also check to see what ports are open, where they are connected, and what their current status is. Type netstat at the command line to see details of active network connections, as shown in the command output. The netstat command will be examined further later in this module.

Like other operating systems, Windows uses networking for many different applications such as web, email, and file services. Originally developed by IBM, Microsoft aided in the development of the Server Message Block (SMB) protocol to share network resources. SMB is mostly used for accessing files on remote hosts. The Universal Naming Convention (UNC) format is used to connect to resources, for example:

The easiest way to connect to a share is to type the UNC of the share into the Windows File Explorer, in the box at the top of the screen which shows the breadcrumb listing of the current file system location. When Windows tries to connect to the share, you will be asked to provide credentials for accessing the resource. Remember that because the resource is on a remote computer, the credentials need to be for the remote computer, not the local computer.

Besides accessing shares on remote hosts, you can also log in to a remote host and manipulate that computer, as if it were local, to make configuration changes, install software, or troubleshoot an issue. In Windows, this feature uses the Remote Desktop Protocol (RDP). When investigating security incidents, a security analyst uses RDP often to access remote computers. To start RDP and connect to a remote computer, search for remote desktop and click the application. The Remote Desktop Connection window is shown in the figure.

Because RDP is designed to permit remote users to control individual hosts, it is a natural target for threat actors. Care should be taken when activating RDP, especially on unpatched legacy versions of Windows such as those that are still found in industrial control systems. Care should be taken to limit the exposure of RDP to the internet, and security approaches and access control policies, such as Zero Trust, should be used to limit access to internal hosts. 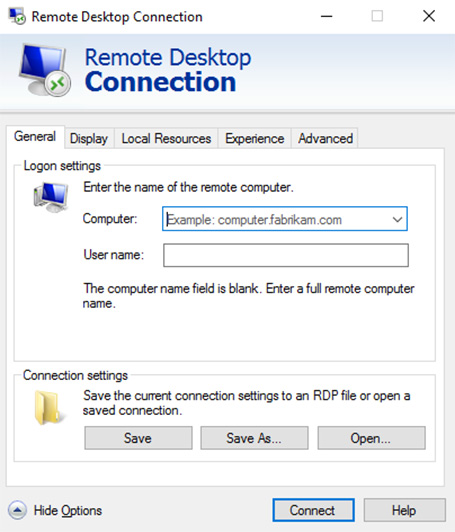 These are some of the services that Windows Server provides:

About Adeniyi Salau 889 Articles
I am an IT enthusiast and a man of many parts. I am a Certified Digital Marketer, Project Manager and a Real Estate Consultant. I love writing because that's what keeps me going. I am running this blog to share what I know with others. I am also a Superlife Stem Cell Distributor. Our Stem Cell Products can cure many ailments.

It is well with the man who deals generously and lends; who conducts his affairs with justice.
Psalm 112:5