Use Of Security Onion As A Source Of Alerts

Security Onion is an open-source suite of Network Security Monitoring (NSM) tools that run on an Ubuntu Linux distribution. Security Onion tools provide three core functions for the cybersecurity analyst: full packet capture and data types, network-based and host-based intrusion detection systems, and alert analyst tools. Security Onion can be installed as a standalone installation or as a sensor and server platform. Some components of Security Onion are owned and maintained by corporations, such as Cisco and Riverbend Technologies, but are made available as open-source.

Security Onion contains many components. It is an integrated environment that is designed to simplify the deployment of a comprehensive NSM solution. The figure illustrates a simplified view of the way in which some of the components of the Security Onion work together.

This is a web application that allows viewing of pcap transcripts rendered with the tcpflow or Zeek tools. CapME can be accessed from the Enterprise Log Search and Archive (ELSA) tool. CapME provides the cybersecurity analyst with an easy-to-read means of viewing an entire Layer 4 session. CapME acts as a plugin to ELSA and provides access to relevant pcap files that can be opened in Wireshark.

Security Onion integrates these various types of data and Intrusion Detection System (IDS) logs into a single platform through the following tools:

Security alerts are notification messages that are generated by NSM tools, systems, and security devices. Alerts can come in many forms depending on the source. For example, syslog provides support for severity ratings which can be used to alert cybersecurity analysts regarding events that require attention.

In Security Onion, Sguil provides a console that integrates alerts from multiple sources into a timestamped queue. A cybersecurity analyst can work through the security queue investigating, classifying, escalating, or retiring alerts. Instead of using a dedicated workflow management system such as Request Tracker for Incident Response (RTIR), a cybersecurity analyst would use the output of an application like Sguil to orchestrate an NSM investigation.

Alerts will generally include five-tuples information when available, as well as timestamps and information identifying which device or system generated the alert. Recall that the five-tuples includes the following information for tracking a conversation between a source and destination application:

Additional information could be whether a permit or deny decision was applied to the traffic, some captured data from the packet payload, or a hash value for a downloaded file, or any of a variety of data.

The figure shows the Sguil application window with the queue of alerts that are waiting to be investigated in the top portion of the interface. 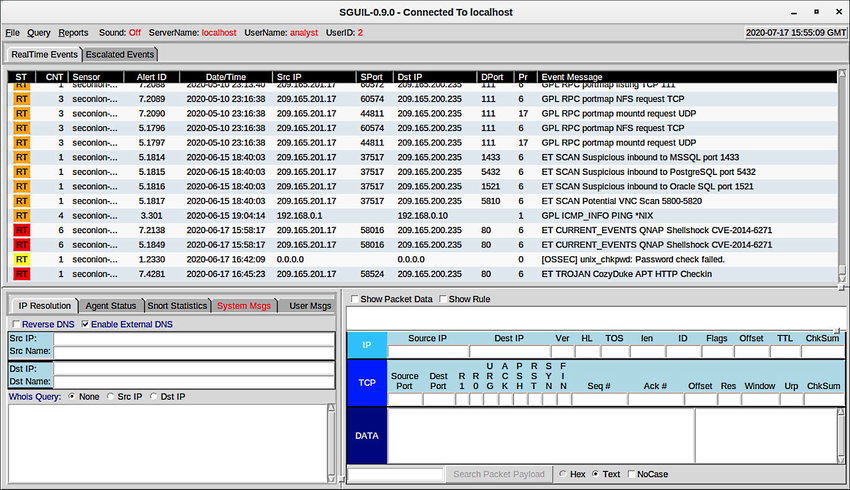 The fields available for the real-time events are as follows:

Depending on the security technology, alerts can be generated based on rules, signatures, anomalies, or behaviours. No matter how they are generated, the conditions that trigger an alert must be predefined in some manner.

Alerts can come from a number of sources:

The information found in the alerts that are displayed in Sguil will differ in message format because they come from different sources.

Sguil Alert and the Associated Rule

Snort rules consist of two sections, as shown in the figure: the rule header and the rule options. The rule header contains the action, protocol, source and destination IP addresses and netmasks, and the source and destination port information. The rule options section contains alert messages and information on which parts of the packet should be inspected to determine if the rule action should be taken. Rule Location is sometimes added by Sguil. Rule Location is the path to the file that contains the rule and the line number at which the rule appears so that it can be found and modified, or eliminated, if required.

The rule header contains the action, protocol, addressing, and port information, as shown in the figure. In addition, the direction of flow that triggered the alert is indicated. The structure of the header portion is consistent between Snort alert rules.

Snort can be configured to use variables to represent internal and external IP addresses. These variables, $HOME_NET and $EXTERNAL_NET, appear in the Snort rules. They simplify the creation of rules by eliminating the need to specify specific addresses and masks for every rule. The values for these variables are configured in the snort.conf file. Snort also allows individual IP addresses, blocks of addresses, or lists of either to be specified in rules. Ranges of ports can be specified by separating the upper and lower values of the range with a colon. Other operators are also available.

The structure of the options section of the rule is variable. It is the portion of the rule that is enclosed in parenthesis, as shown in the figure. It contains the text message that identifies the alert. It also contains metadata about the alert, such as a URL that provides reference information for the alert. Other information can be included, such as the type of rule and a unique numeric identifier for the rule and the rule revision. In addition, features of the packet payload may be specified in the options. The Snort users manual, which can be found on the internet, provides details about rules and how to create them.

Snort rule messages may include the source of the rule. Three common sources for Snort rules are:

Rules can be downloaded automatically from Snort.org using the PulledPork rule management utility that is included with Security Onion.

Alerts that are not generated by Snort rules are identified by the OSSEC or PADS tags, among others. In addition, custom local rules can be created.

In this lab, to get familiar with firewall rules and IDS signatures you will:

About Adeniyi Salau 791 Articles
I am an IT enthusiast and a man of many parts. I am a Certified Digital Marketer, Project Manager and a Real Estate Consultant. I love writing because that's what keeps me going. I am running this blog to share what I know with others. I am also a Superlife Stem Cell Distributor. Our Stem Cell Products can cure many ailments.

Rejoice in hope, be patient in tribulation, be constant in prayer.
Romans 12:12